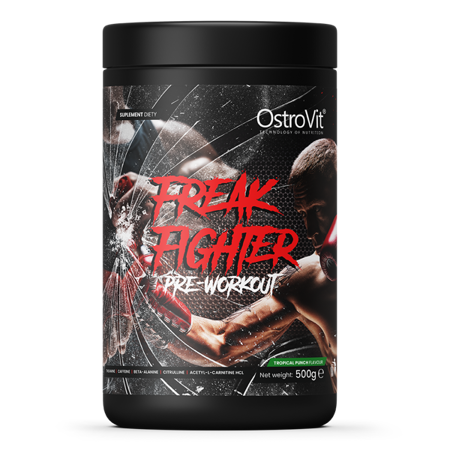 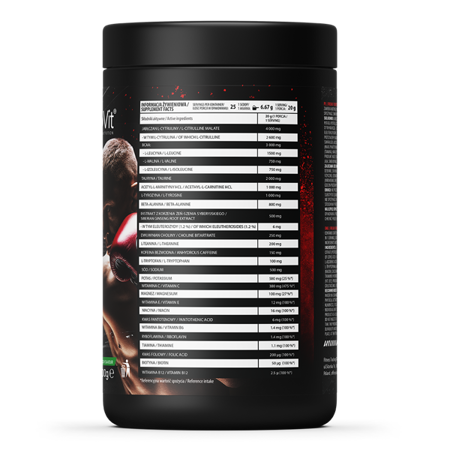 OstroVit Freak Fighter is a well-thought composition of active ingredients which stimulate the body and mind. Its composition contains the following:

BCAA amino acids - they keep a positive nitrogen balance during workout, thus improving assimilation of proteins. They support growth of muscles and repair of muscle fibers.

Taurine - it supports operation of brain, heart, kidneys and muscles. It acts as a neurotransmitter in the brain and cell membrane stabilizer. It accelerates transportation of such compounds as potassium and sodium.

Potassium citrate - it influences heart and conducts nerve impulses. It is responsible for hydration of cells during workout and regulates blood sugar transportation. It supports after-effort regeneration too.

L-tyrosine - it participates in synthesis of dopamine and adrenaline. It helps you recover after taking effort, increases motivation and resistance to stress.

Beta-alanine - it raises muscle carnosine level, thanks to which muscles may work heavier and longer. It has an impact on workout intensity, and improves endurance as well.

Anhydrous caffeine - it boosts metabolism. It has stimulating properties and gives energy. It also supports reduction of fatty tissue.

Siberian ginseng root extract - it fosters organism resistance and prepares it for increased physical effort. It gives energy also when you are weak and tired.

Vitamin B complex (riboflavin, pyridoxine hydrochloride, cyanocobalamin) - it provides protection and raises endurance during workout. It secures your organism against oxidative stress and injuries.

Product is intended for adults with increased physical activity. Disposable intake of beta-alanine in excess of 800 mg may cause side effects (tingling, numbness). It is advisable to consume a single serving of 800 mg with a break of at least 3 hours between individual unit servings of the product.

Food supplement in powder with tropical punch flavour. Contains sweeteners. Contains caffeine; it is not recommended for use by children and pregnant women (content of caffeine 150 mg in 1 serving), do not consume with other products that are a source of caffeine or other ingredients with similar effects.

Do not exceed the recommended daily dose. Do not use the product as a substitute (replacement) for a varied diet. Recommended are balanced diet and healthy lifestyle. Do not ingest if you are allergic to any of the ingredients. Children, pregnant or nursing woman must not take the product. Keep out of the reach of children.